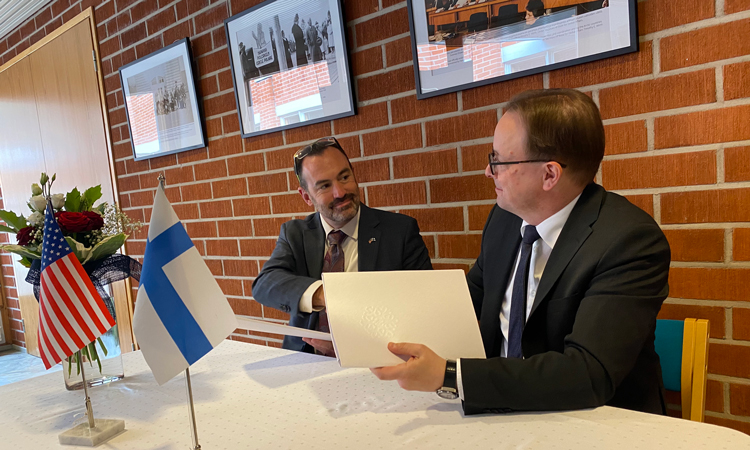 Ian Campbell, Chargé d’Affaires ad interim at the U.S. Embassy in Finland and Antti Syväjärvi, Rector of the University of Lapland, signed a memorandum of understanding to jointly establish the “American Arctic Connection” on September 6, 2021.

The American Arctic Connection, a joint agreement between the U.S. Embassy in Finland and the University of Lapland, establishes a new framework to further support and strengthen collaboration in science, exchanges, and information sharing in the Arctic.  The purpose of the agreement is to deepen the dialogue on shared Arctic and other bilateral issues, such as social and economic impacts of rapid environmental changes and globalization, by facilitating discussion among scholars, students, subject matter experts, and public audiences.

On Monday, September 6, 2021, Ian Campbell, Chargé d’Affaires ad interim at the U.S. Embassy in Finland and Antti Syväjärvi, Rector of the University of Lapland, signed a memorandum of understanding to jointly establish the “American Arctic Connection” – a platform that will serve as a two-way meeting point for Arctic knowledge.

The American Arctic Connection will reside at the main building of the University of Lapland and will host a variety of programs and activities, such as group discussions, virtual programs, guest lectures, and cultural presentations. The arrangement will also support exchange programs between the University and American higher education institutions which are particularly, but not exclusively, members of the University of the Arctic network.

The United States and Finland have a long tradition of nurturing Arctic cooperation in the fields of science and education. The first meetings to establish the University of the Arctic took place in Fairbanks, Alaska, and the UArctic was officially launched in Rovaniemi in 2001. The Fulbright Arctic Initiative has since 2015 facilitated the formation of a network of scholars specializing in Arctic issues and provided opportunities for all Arctic Council member states to carry out collaborative research on public policy questions related to the unique challenges of the Arctic region. The purpose of the American Arctic Connection is not only to further amplify opportunities provided by existing collaboration, but also to create new opportunities for larger audiences to discuss the future of the Arctic.