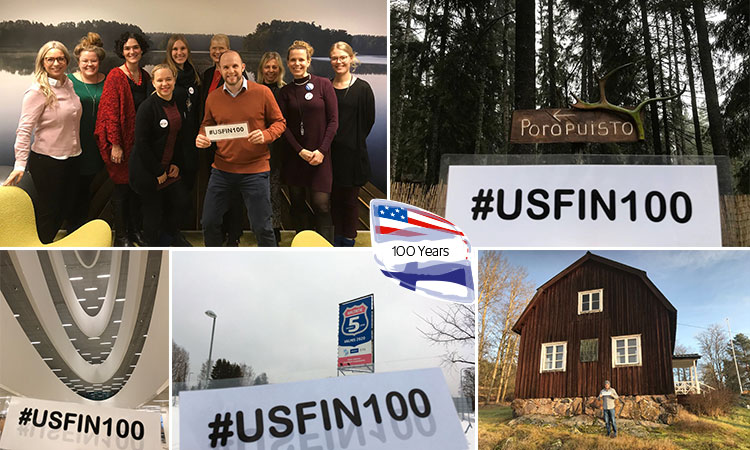 To commemorate the anniversary year of the U.S.-Finnish diplomatic relations, the U.S. Embassy Finland took on a challenge. By the end of 2019, our American diplomats and friends of the Embassy community decided to try and visit 100 places in Finland – and we did it! From Lampivaara Amethyst Mine in January to Visulahti in Mikkeli in December, we managed to visit 100 places around the beautiful country.

More information about the anniversary year available on our web page Celebrating 100 Years of U.S.-Finnish Diplomatic Relations in 2019.

December 1. Fazer Factory, Vantaa: ‘Tis the Season – and this is where the magic happens! Finns love chocolate all year round but Christmas time in particular is the perfect season for Fazerin sininen, Geisha, and Fazerina. (80/100)

December 7. Grangård, Rajamäki: Can you think of a better way to celebrate the holiday season than by cutting down your own Christmas tree? Deputy Public Affairs Officer Ethan Tabor had a chance to do that in Grangård tree farm in Rajamäki where the trees are certified organic. (83/100)

December 9. Manta Christmas Market in the heart of Helsinki: Mantan joulumarkkinat is held at Havis Amanda square in Helsinki until January 8th. There are dozens of stalls from which you can buy food and beverages both hot and cold, Finnish bakery products, packed delicacies, and crafts. (85/100)

December 12. The Parliament House, Helsinki: Did you know that there is a piece of the United States inside the Finnish Parliament House? Built in the 1930s, architect J. S. Sirén acquired pressed sugarcane pulp from Louisiana, United States, that was used in the ceiling of the plenary chamber to improve acoustics. In 2014, some of the sugarcane tiles were renewed, and this time the sugarcane pulp was acquired from Australia. U.S. Embassy Finland staff members enjoyed a wonderful tour of the Parliament House arranged by the Helsinki Diplomatic Association. (87/100)

December 12. Museum of Contemporary Art Kiasma, Helsinki: Kiasma Museum of Contemporary Art was designed by American architect Steven Holl. The story of the Kiasma building began with an architectural competition held in 1992. The winning entry – one of 516 proposals – was Chiasma by the Steven Holl. The name, which denotes a point of crossing, was changed to Kiasma, and was incorporated into the name of the museum itself. The opening of the new museum was celebrated in May 1998. (88/100)

December 12. The Central Railway Station, Helsinki: In 1904, Eliel Saarinen won the architectural competition to design Helsinki’s central railway station. The Central Railway Station and its administrative buildings are among Eliel Saarinen’s most important achievements in Finland. The station was finally completed in 1919. A few years later, after winning the second prize in the competition to design the Chicago Tribune skyscraper, Eliel Saarinen moved permanently to the United States. (89/100)

December 17. Kaisa Library, Helsinki: Built in 2012, Kaisa House is a marvelous example of Finnish architecture. The Helsinki University Main Library is situated in the former department store Kauppakeskus Kaisa and now welcomes around 8,000 students and visitors daily either studying or admiring the award-winning architecture by Anttinen Oiva Arkkitehdit Oy. (92/100)

December 17. American Resource Center, Helsinki: The American Resource Center, a library and information center concentrating solely on the United States, is located at the Kaisa Library second floor. The specialty library was established in 1946 as America Center Library and is currently managed in cooperation with the Public Affairs Section of the U.S. Embassy Finland and Helsinki University. (93/100)

December 18. Frederikinkatu 77, Helsinki: Frans Emil Sillanpää, a beloved Finnish writer and the only Finnish author to receive a Nobel Prize for literature, lived in a house on Frederikinkatu when he received the news about his Nobel Prize on November 10, 1939. (94/100)

December 20. Mannerheim Museum, Helsinki: The museum depicting the life and times of Baron Gustaf Mannerheim, Marshal of Finland (1867—1951), has been functioning since 1951 in the same villa in the Kaivopuisto district of Helsinki where he lived during the period 1924—51. With the exception of a few rooms that have been converted for exhibition purposes, his home has been preserved in its original state. (97/100)

December 29. Saimaa, Rantasalmi: Lake Saimaa in the Southeastern Finland is the largest lake in Finland and the fourth largest natural freshwater lake in Europe. Major towns on the lakeshore include Lappeenranta, Imatra, Savonlinna, Mikkeli, Varkaus, and Joensuu. This scenery, however, was captured in Rantasalmi. (99/100)

December 30. Visulahti, Mikkeli: Highway 5 between Mikkeli and Juva has adopted a perfect sign to advertise the reconstruction of the road as well as the upcoming shopping mall. (100/100)