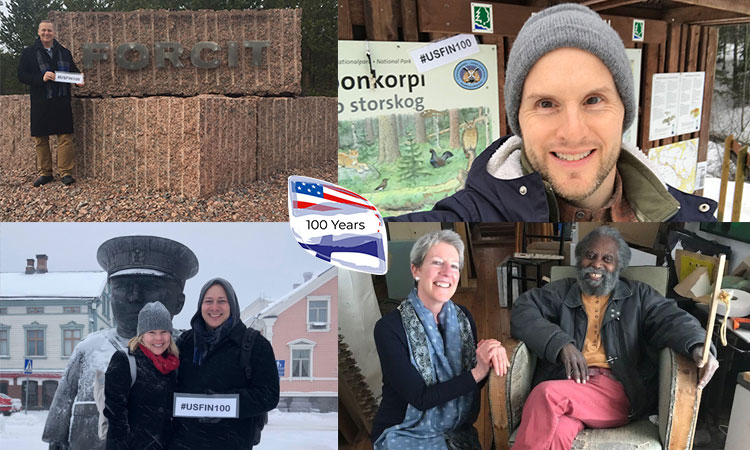 January 2019. Pyhä-Luoston Kansallispuisto: Allison and Rob Hunyor traveled to Pyhä-Luosto National Park to check out Lampivaara Amethyst mine, to play in the snow, and to get the full Lapland experience. (1/100)

February 1. Uunisaari, Helsinki: American filmmaker Dava Whisenant and Deputy Public Affairs Officer Ethan Tabor enjoyed Baltic sauna and avanto at DocPoint’s Sauna Aamu. Just before the event, the DocPoint team said the point was to stay in the sauna until you feel like you are about to die, then swim until you feel like you are going to die, and repeat until you feel alive. We did. It was bliss. During her trip to Helsinki, Whisenant also opened several screenings of her film Bathtubs Over Broadway and led a masterclass for students at Metropolia. (2/100)

February 7. Oulu: Josh Glasser from the Department of State’s Bureau of Oceans, Environment, and Scientific Affairs visited Oulu to participate in the One Arctic – One Health Conference. The conference marked the culmination of a U.S.-Canadian-Finnish project under the Finnish chairmanship of the Arctic Council. The project has brought together Arctic Council members to share their research, operational, and diplomatic activities in support of One Health. #OneHealth recognizes that the health of people is connected to the health of animals and the environment – a key strategy for resiliency and health security in the Arctic region. (3/100)

February 26. Fiskars: Deputy Chief of Mission Donna Welton traveled to Fiskars to meet with artist and designer Howard Smith and ceramist Erna Aaltonen. Howard Smith, who hails from Moorestown, New Jersey and arrived in Finland in 1962, has worked as an artist in Fiskars for 23 years. Howard Smith has also worked as a designer at Arabia and Vallila Interior. His latest exhibit opened in Fiskars December 1, 2018. (7/100)

February 28. Hanko: Major Chris Distifeno visited Forcit Oy, a major Finnish defense contractor based in Hanko. Forcit was an excellent host and provided a wonderful tour of their operations and facilities. Chris also took the opportunity to explore Hanko. Hanko is a wonderful city with many opportunities for families to spend time and enjoy coastal Finland. (8/100)