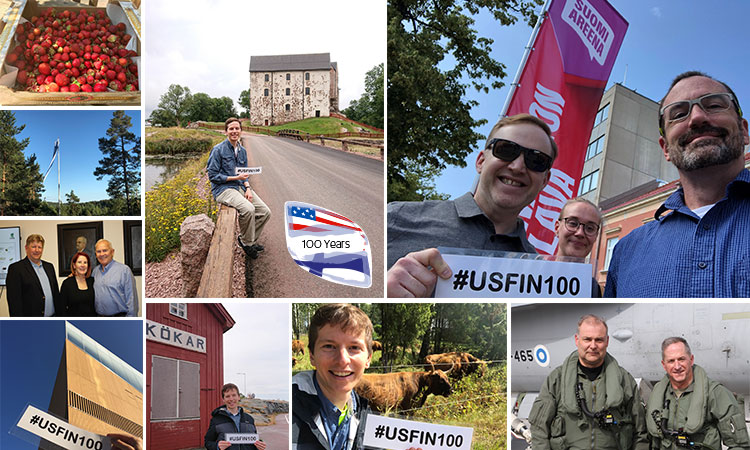 July 6-7. Parainen: Ethan Tabor and his family traveled to Parainen for a wonderful weekend of nature, friends, good food, and sauna. (48/100)

July 13. Koivistoisen Mansikkatila, Vantaa: Ethan Tabor and his family picked fresh strawberries at Koivistoinen Farm in Vantaa to make some delicious fresh Finnish strawberry jam for the fall and winter. (49/100)

August 8. Hammarland, Åland Islands: Political and Economic Officer Harald Olsen spent four days riding his bike from Eckerö to the port of Långnäs. The cows greeted him in Hammarland. (53/100)

August 9. Kastelholm Castle, Åland Islands: Political and Economic Officer Harald Olsen spent four days riding his bike from Eckerö to the port of Långnäs. The castle in the background is Kastelholm Castle, the only one in Åland. (54/100)

August 10. Kökar, Åland Islands: Political and Economic Officer Harald Olsen spent four days riding his bike from Eckerö to the port of Långnäs. The last stop on his Åland tour was the tiny island of Kökar. (55/100)

August 17. Suomenlinna, Helsinki: Suomenlinna is an 18th-century sea fortress and nature area with centuries-old artillery and defensive walls, spread across 6 linked islands. It is a perfect day trip destination for families. In 1991, the Suomenlinna fortress was added to the UNESCO World Heritage List as a unique monument of military architecture. Another special feature of the fortress is that in the course of its history it has served in the defence of three realms: Sweden, Russia, and Finland. (57/100)

August 24. Nuuksio National Park, Espoo: U.S. Embassy Finland staff enjoyed a fun Saturday outdoors in nature when the Community Liaison Office organized a guided mushroom and berry tour at Nuuksio, Espoo. The Nuuksio National Park is within easy reach of the capital city and is a treasure chest of all things Finnish forests can offer. (58/100)

August 28. Oodi Central Library, Helsinki: Oodi was voted winner of the 2019 Public Library of the Year award by the International Federation of Library Associations (IFLA) in Athens on Tuesday, August 27. Congratulations from the U.S. Embassy Finland – you are the best! (59/100)

August 30. Business Festival Shift, Turku: U.S. Embassy Finland was happy to host Dr. Catherine Havasi from MIT for her 3-day program in Finland. At Shift Business Festival in Turku, she talked about the “Importance of Collaboration in AI Projects” and got to visit beautiful downtown. (60/100)