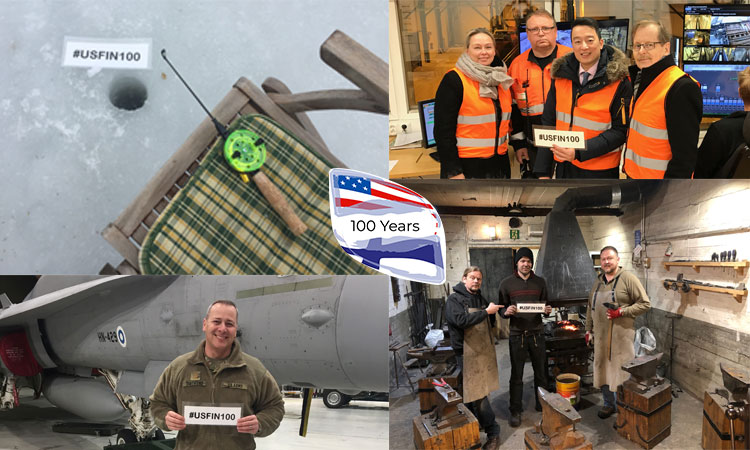 To commemorate the anniversary year of the U.S.-Finnish diplomatic relations, the U.S. Embassy Finland is taking on a challenge. By the end of 2019, our American diplomats and friends of the Embassy community will try to visit 100 places in Finland. Can we do it? Follow along as we journey through Finland to celebrate our strong relationship. Please check our webpage for more information about the anniversary year Celebrating 100 Years of U.S.-Finnish Diplomatic Relations in 2019. The Google Map tracing our journey is available online.

March 10. Helsinki: Political-Economic Section Chief Shawn Waddoups is making the most of his time in Helsinki. He and his wife are visiting all 13 swimming halls open to the public around the city as well as Vantaa and Espoo. This time they were checking out the pools at Kallio. (10/100)

March 18. Störsvik: Major Chris Distifeno tried his hand at Ice Fishing, Finland style along the Finnish coast at Störsvik. Sadly the fish were too crafty that day and all Major Distifeno got was the flu. (13/100)

March 19. Kemi: Consul Jeremy Wisemiller and family at the Kemi Snow Castle, the largest snow fort in the world. The Snow Castle of Kemi is rebuilt every winter with a different theme. (16/100)

March 22. Pietarsaari: Political Officer Harald Olsen met with Trey Howard, a member of the Pietarsaari town council originally from Washington state. Trey and Harald posed in front of Finland’s largest clock tower, which stands on top of an old factory that now serves as the town’s government offices. (19/100)

March 26. Turku: Political-Economic Section Chief Shawn Waddoups met with Tuomas Martikainen, Director of the Migration Institute of Finland. The Institute is a leader in researching one of the strongest U.S.-Finnish links. They are also doing great work on some of the most important issues facing our countries and the movement of people. (20/100)

March 27. Kemijärvi: The Embassy Finland’s Political-Economic Section visited Kemijärvi’s Keitele wood products sawmill. (Far right is Heikki Nivala, CEO of Boreal Bioref, and second from left is Jarmo Kaatranen, the mill’s production manager.) The mill has the world’s fastest feed line – traveling at 180 meters per minute, it cuts 37 trees a minute totaling up to 55 logging trucks and 40,000 trees a day. (22/100)

March 30-31. Inari: Dylan Fisher and Janet Heilig traveled to Inari for to see the Northern Lights and the Inari Reindeer Championships Race. (23/100)