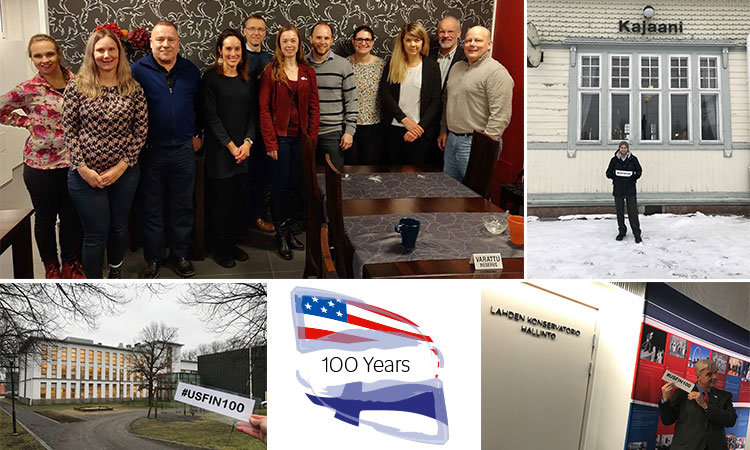 November 6. Kajaani: Deputy Public Affairs Officer Ethan Tabor posing in front of one of the most beautiful train stations in Finland. This Jugend building was constructed in 1904-1905. (74/100)

November 6. Eino Leino statue, Kajaani: Beloved Finnish poet Eino Leino reads his poems in Kajaanin rantapuisto rain or shine – or snow. The statue is designed by Alpo and Nina Sailo and it was revealed in 1980. (75/100)

November 7. Jyväskylä: Did you know that Jyväskylä is the capital city of Alvar Aalto’s architecture? The city has the largest number of masterful buildings in the whole world designed by the world-famous architect and academician Alvar Aalto. Deputy Public Affairs Officer Ethan Tabor had a chance to visit the museum which focuses on fostering the heritage of Alvar Aalto. (76/100)

November 20. Oulu: Deputy Public Affairs Officer Ethan Tabor enjoyed a wonderful lunch at the restaurant Perla with Oulu Finnish American Society. Thank you for having us! (77/100)

November 27. Lahden konservatorio: Lahti Conservatory is both a music school with 1,000 students and a vocational school for about 50 students with a music profession in mind. The conservatory was originally established in the city of Vyborg in 1918. It was relocated to Lahti in 1940 and has operated in its current location since 1954. On November 27, the Lahti Finnish American Society and PAO Bill Couch opened the photo exhibition celebrating the 100th anniversary of diplomatic relations. The exhibition is open until December 11, 2019. (79/100)