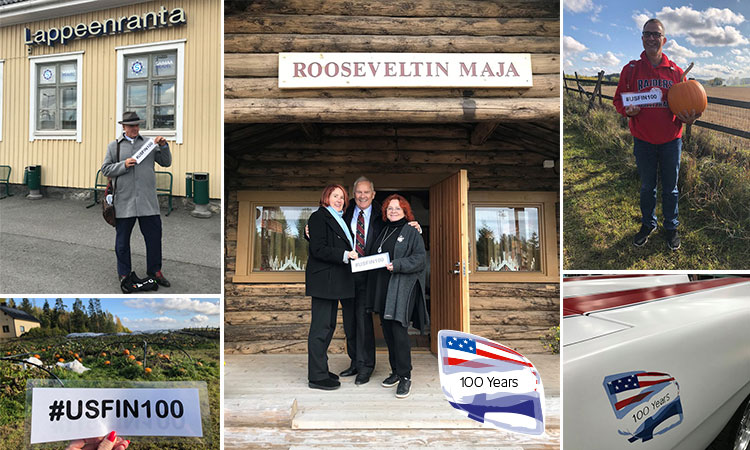 September 11. Joensuu: Ambassador Robert Pence’s visit to Joensuu included a speech at the Paasikivi Society; visit to John Deere forest machine factory; visit to Carelicum, the North Karelian Museum; dinner with city leaders; and a visit to the tallest wood-framed building in the world – Joensuu Lighthouse. (61/100)

September 12. Lappeenranta: Ambassador Pence visited LUT University in Lappeenranta to speak to a business audience, to visit the J. Hyneman Center, to meet with students, and to talk with LUT researchers. (62/100)

September 14. Linnanmäki, Helsinki: Who could resist amusement parks? Linnanmäki is the oldest amusement park in Finland. Opened in 1950, it is owned by non-profit Lasten Päivän Säätiö, which operates the park in order to raise funds to Finnish child welfare work. Deputy Public Affairs Officer Ethan Tabor and his family enjoyed a fall evening at the park in September. (64/100)

September 27. Peräjänkulma, Vantaa: SAM Helsinki members with their American friends, including Colonel Keith Felter, were blessed with great weather during the annual pumpkin patch visit – the only pumpkin farm in Finland. (67/100)

October 10. Helsingin kauppatori: Stadin Silakkamarkkinat – Helsinki Baltic Herring Market since 1743 is one of the oldest events in Finland. PAO Bill Couch took his 9-year-old son to the market to enjoy some delicious fresh herring! (69/100)

October 27. Helsingin messukeskus: Helsinki Book Fair was organized on October 24-27, 2019. Last year the theme country was the United States, this year it was France’s turn. (70/100)