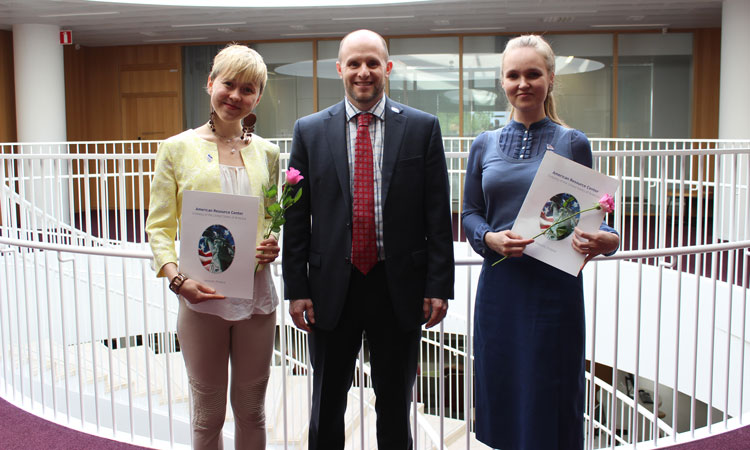 Deputy Public Affairs Officer Ethan Tabor had the pleasure of congratulating the new American Studies Grant winners at the Kaisa Library on June 11, 2019.

Heidi Pennanen from the University of Helsinki was awarded for her Master’s Thesis “International Space Law and Space Resource Utilization – United States’ Approach to Freedom of Use.”

Salla Uusitalo from the University of Tampere was awarded for her Master’s Thesis “Expanding Corporate Social Responsibility – Starbucks as a Political & Human Rights Activist in the American Society.”

Heini Ylärakkola from the University of Turku was awarded for her Master’s Thesis “California Dreaming – Finns in California since the Gold Rush till Silicon Valley.”

Heidi Pennanen and Salla Uusitalo were present in the award ceremony.

The U.S. Embassy Finland has been running its successful grant program for Finnish university students who are working on their Master’s thesis that concentrates on the United States since 2006. So far, 25 students have received the award.