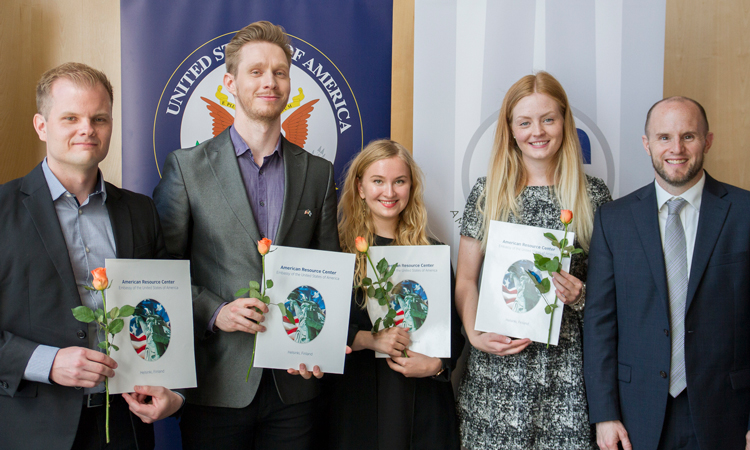 The U.S. Embassy Finland hosted the winners of the 2017 American Resource Center (ARC) Grant 2017  at a ceremony in the Embassy’s Innovation Center on May 21, 2018. The U.S. Embassy awarded a record number of four ARC Grants this year due to the exceptionally high quality of applications last fall.

Ms. Emilia Lehtonen, a student at the University of Helsinki, was awarded for her Master’s Thesis “Transfer of Business to the USA and its Tax Implications – The Private Equity Fund’s Perspective.”

Mr. Tuomas Lieskivi, a student at the University of Turku, was awarded for his Master’s Thesis “Made in America – America-related Representations and Author-positions in Articles of Suomen Kuvalehti in 2016.”

Ms. Tinja Nieminen, a student at the University of Jyväskylä, was awarded for her Master’s Thesis “The Feminist Voice of Hip-hop? – Negotiating Alternative Identities in Contemporary American Hip-hop.”

Mr. Ilmari Reunamäki, a student at the University of Tampere, was awarded for his Master’s Thesis “The Mentality of an American Civil War Soldier in the Wartime Letters.”

More images of the ceremony are available at the ARC’s Flickr album.

Since 2006, the ARC has managed this grant program for Finnish university students, who are working on a Master’s thesis concentrating on the United States. So far, 22 students have received the award.