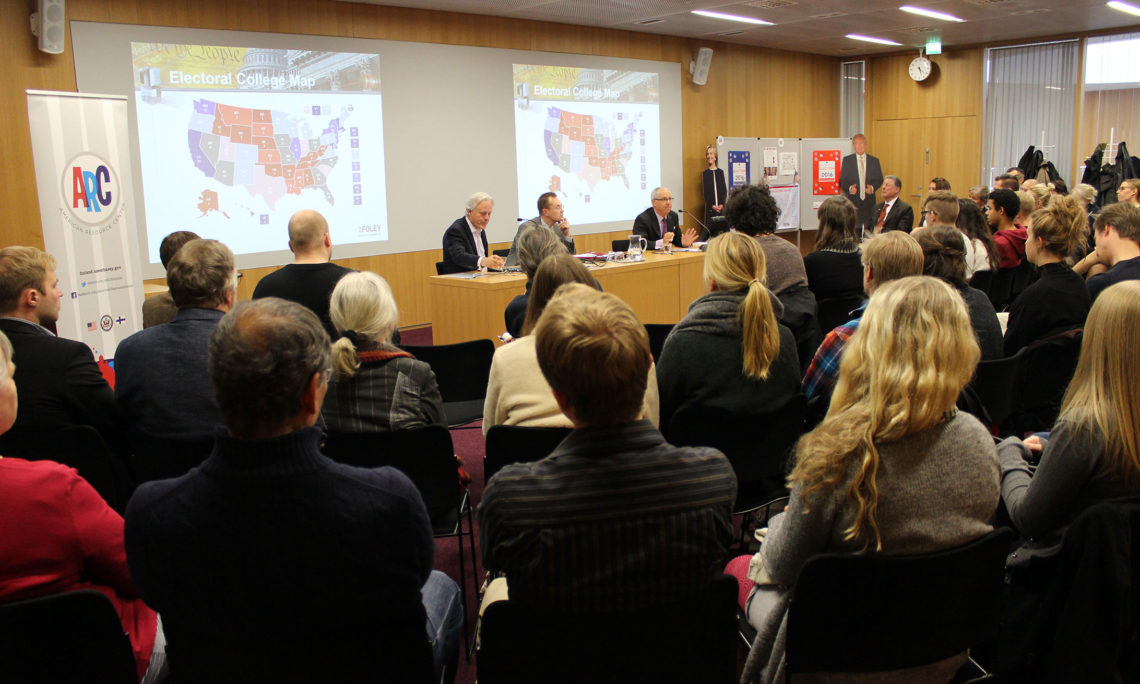 Scott Klug and Larry LaRocco at the event hosted by the American Resource Center. The event was moderated by Professor Mikku Saikku.

On October 13 and 14, the Embassy hosted a pre-presidential election program with presentations from both sides of the American political spectrum, given by speakers with exceptional knowledge of U.S. politics. Our speakers interacted with several Finnish groups, from students to members of the Finnish parliament on a topic which Finns appear to be keenly interested in  and well-informed of – the U.S. Presidential election process.

Scott Klug is former Member of Congress, representing the Republican Party, during which time he was appointed by President Bush to two terms on the President’s Advisory Board on Trade and Policy Negotiations, and Governer Scott Walker appointed him Treasurer of the Wisconsin Economic Development Corporation. Today Scott Klug is a public affairs director and co-chair of the Federal Public Affairs Practice at the national law firm of Foley & Lardner LLP.

Larry LaRocco is former Member of Congress as a representative of the Democratic Party. LaRocco served on the House Financial Services Committee and the House Natural Resources Committee, and later as the Managing Director of the Americans Bankers Association.

They met with the Association of Foreign New Journalists, visited Helsinki’s Media High School, had lunch with members and staffers of the Finnish parliament, spoke with students and faculty at the Swedish School of Economics, Hanken, and addressed an audience of students, political scientists and general public at the American Resource Center.

On Day Two, the program included a session with the Atlantic Council of Finland, and the two speakers took some time to talk to the Embassy staff about the moods and events in the United States. They then met over lunch with the youth leaders of several of Finland’s political parties and returned to the Embassy to meet with the local Harvard Club.