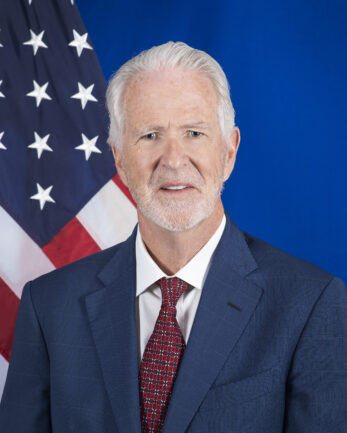 Douglas Hickey was sworn in as the U.S. Ambassador to the Republic of Finland on April 6, 2022. Previously, Ambassador Hickey served as the Managing Director of Hickey Gryphon QOF. He has more than 30 years of operational experience holding senior-level positions in the telecom, internet, and technology industries. President Obama appointed Ambassador Hickey as the United States Commissioner General at Expo Milano in 2014. As Commissioner General, he oversaw the creation of the USA Pavilion that told America’s food security story to spur a global conversation about the challenges of feeding the planet.

Ambassador Hickey has also served as the President and CEO of San Francisco-based BinWise, Inc., the leading provider of analytics to premier restaurant, hotel, and entertainment groups around the world, and before that was Managing Director of Hummer Winblad Venture Partners. Ambassador Hickey was CEO of Critical Path, the leading provider of messaging services to corporations around the globe. He was also President and CEO of Global Center, which became one of the first and largest providers of advanced web hosting and content distribution on the web.

Mr. Hickey earned his B.A. from Siena College, Loudonville, New York in 1977 and was awarded an Honorary PhD from Sienna College in 2016.