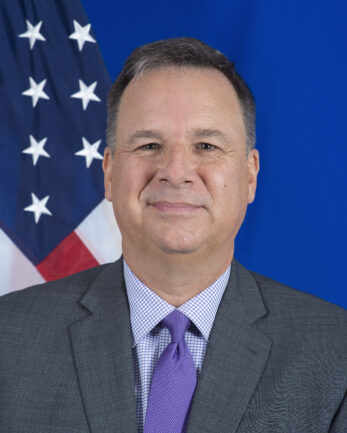 Christopher Krafft assumed his current assignment as Deputy Chief of Mission at the U.S. Embassy in Helsinki, Finland in August 2022, where he leads the approximately 150 American and Finnish staff of the U.S. mission and the administration of bilateral programming and overall mission operations.

Mr. Krafft previously served as Chargé d’Affaires and Deputy Chief of Mission at the U.S. Embassy in Kampala, Uganda from September 2019 to July 2022. He also served as the Deputy Chief of Mission at the U.S. Embassy in Lusaka, Zambia (2016-2019). Prior to that, he served as Deputy Director of the State Department’s Office of Central African Affairs (2013-2016), where he was responsible for oversight of U.S. policy towards, and relations with ten countries in the central African region, as Deputy Director of the Office of International Security Operations, Political-Military Affairs Bureau (2010-2012), as Political Advisor to the Combined Joint Special Operations Task Force in Iraq (2009-2010), and as Deputy Political Counselor at the United States Embassy in Ankara, Turkey (2006-2009). He also served as a Congressional Fellow in the office of Senator Olympia Snowe (2004-2005), advising the Senator on issues related to national security policy and intelligence matters.

Mr. Krafft’s other overseas postings have included assignments as a Political Officer in Pretoria, South Africa; as Special Assistant to the Ambassador in New Delhi, India; and as Vice Consul in Bern, Switzerland as well as domestic assignments as Country Desk Officer for South Africa, for Burma/Laos, and as Country Desk Officer for Ireland/Northern Ireland and Advisor to the Special Envoy for the Northern Ireland Peace Process.

Before joining the Foreign Service, Mr. Krafft was an Assistant Director of the Washington, DC office of the Governor of the State of Illinois and a Special Assistant to the Assistant Secretary of Commerce for Congressional and Intergovernmental Affairs.

Mr. Krafft is a 2013 graduate of the National War College with a master’s degree in National Security Strategy and graduated with honors from the University of Michigan, Ann Arbor, with a bachelor’s degree in International Relations. He is a native of Gary and Merrillville, Indiana and was raised and graduated from high school in Saugatuck, Michigan. He and his wife Mary have two sons.