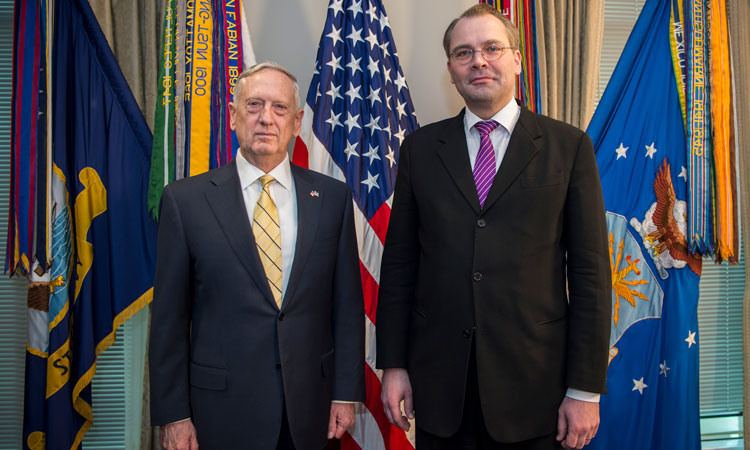 WASHINGTON, March 21, 2017 — Defense Secretary Jim Mattis met with Finnish Defense Minister Jussi Niinisto today at the Pentagon to discuss a range of security issues, including Russian aggression, NATO and the bilateral security cooperation relationship between the two countries, according to a statement by Pentagon spokesman Navy Capt. Jeff Davis following the meeting.

The two defense leaders spoke briefly to the press before their meeting, where Mattis noted that he looked forward to speaking with the defense minister again later this week at a meeting of defense leaders from nations participating in the campaign to counter the Islamic State of Iraq and Syria.

The defense secretary also thanked Niinisto for the military contributions by his nation to the counter-ISIS fight and to NATO missions, as well as to U.N. missions, where, he noted, Finland contributes more than just military power.

“Finland takes its defense very seriously, and we see ourselves as providers of security, not consumers,” Niinisto said.

“The signing of the bilateral statement of intent last October in Helsinki was a concrete step to take the relationship even further,” he noted.

During their meeting, both leaders “identified ways to continue deepening and increasing the lasting security partnership between the two countries,” Davis said.”

Additionally, Mattis and Niinisto “exchanged insights on how to sustain robust military capabilities in fiscally constrained times and noted the benefits of defense cooperation for both nations, especially in the Arctic,” the captain said.

And finally, the defense secretary thanked Niinisto for Finland’s continued cooperation, bilaterally and multilaterally, in a changing European and global defense environment, he said.