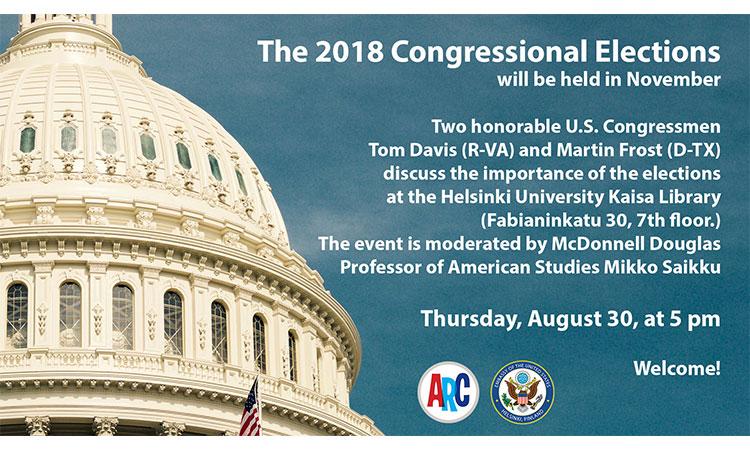 The 2018 Congressional Elections will be held in November. Two honorable U.S. Congressmen Tom Davis (R-VA) and Martin Frost (D-TX) discuss the importance of the elections at the Helsinki University Kaisa Library (Fabianinkatu 30, 7th floor) on Thursday, August 30, at 5 pm – welcome!

The event is moderated by McDonnell Douglas Professor of American Studies Mikko Saikku.

Tom Davis (R-VA) is the director of Federal Government Affairs at Deloitte and rector at George Mason University. He served 14 years in Congress after several years at the local level in Fairfax County, VA. In 1998 and 2000, he served as the chairman of the National Republican Congressional Committee.

Martin Frost (D-TX) currently holds the position of vice president of the U.S. Association of Former Members of Congress and sits as the chairman of the board of the National Endowment for Democracy. He and Tom Davis (R-VA) wrote The Partisan Divide: Congress in Crisis. While in Congress, Frost served on the Budget Committee and was in charge of the Democratic Congressional Campaign Committee for two election cycles, adding 14 more Democrats to Congress.