Home Home | News & Events | Reception in Honor of the 70th Anniversary of the ASLA-Fulbright Exchanges and the Centennial of Finnish-U.S. Diplomatic Relations (August 20, 2019) 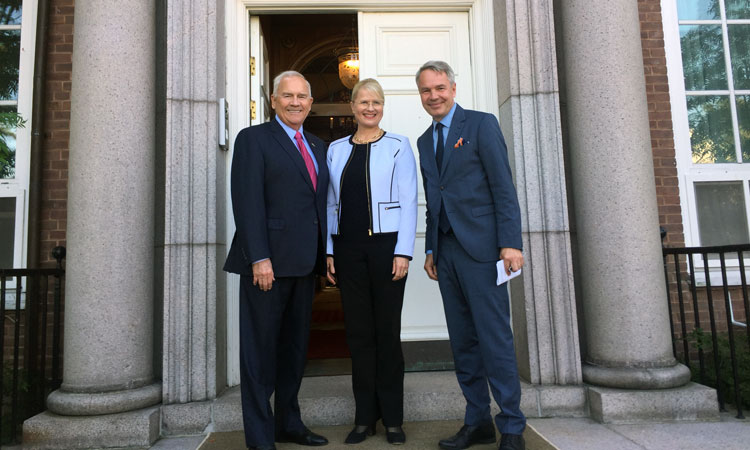 For the academic year 2019-2020, the Fulbright Finland Foundation awards close to 100 grants for Finns and Americans. This year, approximately 55 Americans participate in the Finnish-American Fulbright program. 46 of these Americans have received a Fulbright grant to lecture, conduct research, study, or teach in Finland. In addition, close to ten U.S. Fulbrighters are expected to arrive on a short-term Fulbright grant during the academic year. Altogether, over 5,700 Finns and Americans have received a grant from the Finnish-American program since its inception in 1949.

CEO of the Fulbright Finland Foundation Terhi Mölsä presented the U.S. Embassy Finland with a unique glass “kuksa” cup which was created to celebrate the 70th anniversary of the ASLA-Fulbright Program. The cup is made by Jonathan Capps who was a 2018-2019 U.S. Fulbright Fellow and Glass Artist at the Nuutajärvi Glass Village.

Read more: “Kuksa – an Object that Embodies the Exchange of Culture and Ideas”

More photos of the event available on a Flickr album.