Home Home | News & Events | “Relations between Finland and the United States have never been stronger” (November 6-7, 2017) 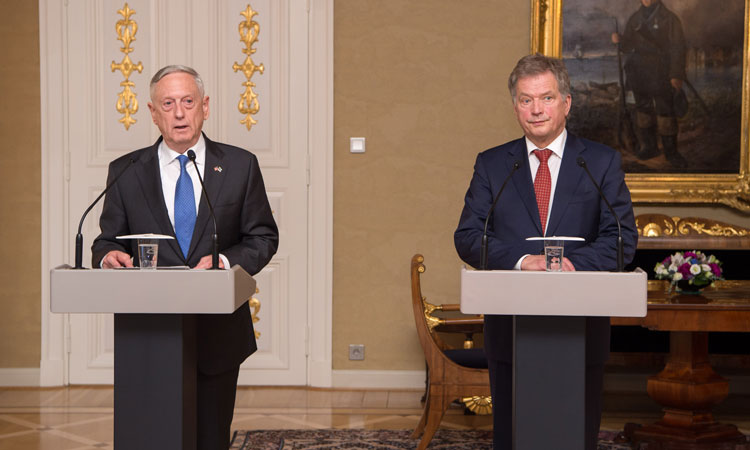 U.S. Secretary of Defense Jim Mattis congratulated Finland on its 100 years of independence and praised its contributions to democracy and global security during his November 6 – 7 trip to Helsinki.

After meeting with President Sauli Niinistö on November 6, Mattis welcomed the “deepening bilateral and NATO defense partnership with Finland” and applauded the Nordic nation’s initiative to establish the European Center of Excellence for Countering Hybrid Threats. “With this center, Finland has created an institution fit for our time, and I thank you, Mr. President, for your foresight,” Mattis commented. He also complimented Finland’s commitment to Nordic defense cooperation, to include assuming the chair for the Arctic Council. “By tightening such cooperation here in the north, we see the deterrent capability of democracies strengthened,” he said. “In today’s conversations, we reaffirm that relations between Finland and the United States have never been stronger.”

In addition to bilateral meetings with President Niinistö and Minister of Defense Jussi Niinistö, Secretary Mattis participated in the Northern Group meeting and a trilateral meeting with Finland and Sweden.