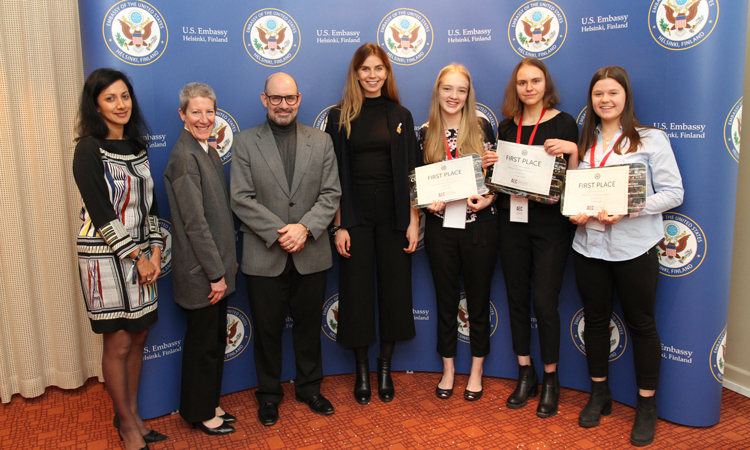 On November 31 and December 1, 2017, the U.S. Embassy organized the Ambassador’s Entrepreneurial Challenge (AEC) finals in Helsinki. This nationwide program invites middle and high school students to form teams of up to four to pitch, in three-minutes, an original entrepreneurial concept in English. Post received more than 150 applications in early October from which it selected teams for semifinals held in a record number of eight Finnish cities. Post invited 15 teams (five from the 13-15 age category and 10 from the 16-18 age category) to Helsinki for the finals where they met with successful startups and participated in workshops led by representatives from the Harvard Business School.

In 2017, the winning team from the 13-15 age category was “Green Credits,” who developed a concept to provide consumers with credits based on smart energy use. The winner from those aged 16-18 was “Indigenus,” creating a concept for an application to track product supply chains to allow consumers to know if the products are responsibly manufactured. The panel of judges was formed by Chargé D’Affaires Donna Welton, former AEC winner and co-founder of Treamer Matias Mäkitalo, Technopolis CEO Kenneth Silverang, Associate Director, HBS Rock Center for Entrepreneurship Thara Pillai and PhD Candidate, CSR Specialist Sonja Lahtinen.