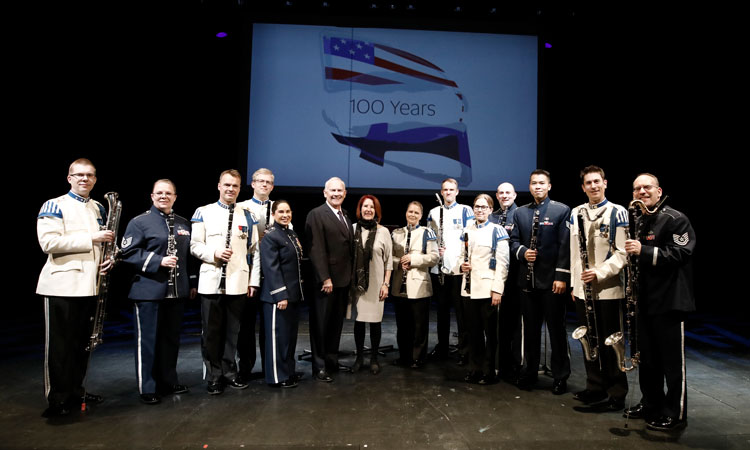 Ambassador and Mrs. Pence with the musicians (image: Jari Flink)

The U.S. Embassy celebrated the 100th anniversary of U.S.-Finnish diplomatic relations at Musiikkitalo on April 17, 2019. The program included a joint concert by a clarinet quartet from the United States Air Forces in Europe (USAFE) Band and a clarinet ensemble from Kaartin Soittokunta, as well as an overview of U.S.-Finnish relations since 1919, welcome remarks by U.S. Ambassador to Finland Robert Pence, Communications and Public Affairs Director at the Finnish Defense Forces Colonel Sami Nurmi, and the Commander of the United States Air Forces in Europe Band Lt. Colonel Cristina Urrutia. Before the concert, the U.S. Embassy debuted the “100 years of diplomatic relations” photo exhibition, a joint project with the Finnish Embassy in Washington, DC. The exhibit, which highlights 100 years of relations through 100 historic and contemporary images, will travel around Finland for events throughout this year.

The Clarinet Ensemble is part of Kaartin Soittokunta, the Guards Band which is the oldest professional wind band in Finland. The Guards Band was established in 1819. Nowadays it is the official representative band of the Finnish Defence Forces consisting of 42 full-time musicians. One of the duties for the Helsinki-based band is performing at The Independence Day’s reception at the Presidential Palace. On top of the official performances, the Guards Band also gives concerts in Finland and abroad.