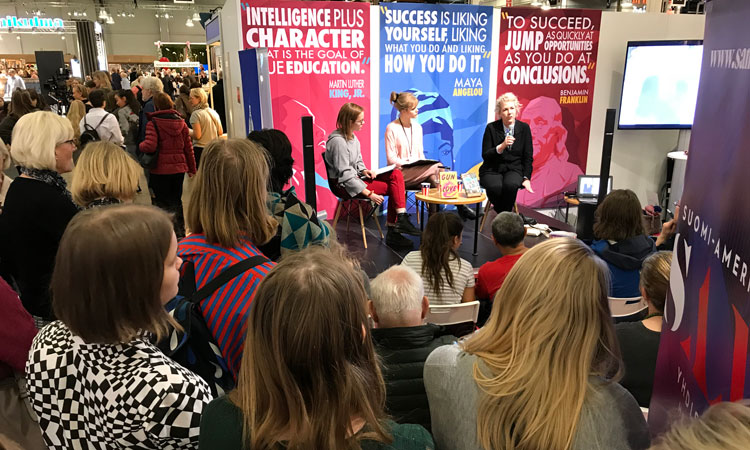 The Helsinki Book Fair, one of the biggest annual cultural events in Finland, drew a record 85,600 visitors this year. Ambassador Pence joined program director Ronja Salmi to open the fair, which featured the United States as the theme country for the first time. In his brief remarks, Ambassador Pence emphasized the meaning of literature and libraries in today’s world. Later that evening, Ambassador Pence hosted a reception with readings by Jennifer Clement, Patricia Lockwood, and Cecilia Samartin.

During the fair, the U.S. Embassy organized more than 20 hours of program at Messukeskus and at other sites, such as discussions at Tikkurila High School with author Patricia Lockwood. At Messukeskus, the Embassy organized a robust four-day program reflecting the diversity of the United States. The book display “50 States – 50 Books” listed a book from each state emphasizing the size and cultural diversity of the 50 American states. The Embassy partnered with the Helsinki City Library to offer a Novellikoukku program combining knitting with storytelling, which provided a calm and relaxing space to hear American short stories.

One of the highlights of the fair was the Embassy-sponsored panel discussion “Changing America” on one of the main stages. Baba Lybeck moderated the fascinating discussion featuring Finnish journalists Mika Hentunen, Olli Herrala, Pirkko Pöntinen, and Rauli Virtanen, who covered the United States as correspondents from the 1970s until today.

More photos of the fair available at the U.S. Embassy Flickr album.