Official websites use .gov
A .gov website belongs to an official government organization in the United States.

I had a conversation with a colleague a few months ago about doing a series of personal social media posts highlighting the top 10 or 20 things I love about Finland. We ultimately decided to turn it into an embassy series, including a couple of fellow diplomats, who breezed through Finnish with me in 2016 and 2017 and who also depart this summer.

Sadly, we ended up with only two posts before corona virus. One was based on our love for all that is right with Runebergin tortut and the other was about Finnish playgrounds. COVID-19 may have altered our project, but COVID also gave me a lot more time to think about the things I love about this magical land Täällä Pohjantähden alla (Under the North Star).

Earlier this summer I reached the milestone of 21 years of service, including 8 in the Air Force and 13 with the State Department. I have lived in six countries in 14 years: UK (’97-’99); Italy (’99 – ’04); Mozambique (’10-’12); Brazil (’13-’14); Afghanistan (’15-’16); and Finland (’17 – present). Each place has shaped me, while teaching me about the many shared hopes and dreams of most of us around the world, regardless of language, religion, history, ethnicity, etc. The UK deeply impacted me because it was my first true international experience (aside from Canada, which I could almost see from my house in Northeast Ohio). Italy shaped me more than any other place in my 20s, as I fell in love with my wife, road biking, history, art, wine, and food over five glorious years in Bella Toscana. I learned more about human resilience and happiness over 12 months in Kabul than in the previous 30+ years of my life.

Yet no place will leave such a deep and enduring impact on me as Finland. As the movers packed up the last boxes of my daughter’s room before our departure, I felt emotional and sad about leaving a country for the first time ever. We made amazing friends here and watched our daughter change from a 10-month old into a strong, funny, confident, and fiercely independent kiddo. I would like to think that I have been instrumental in her development, but I believe it takes a village. In that sense we are eternally grateful to Finland and its people, education system, playgrounds, libraries, parks, and unmatched quality of life for helping us raise our precious girl.

I come from a land that doesn’t get a lot positive press, which is partially a reflection of the exaggerated importance given to the American coasts (other than the North Coast) and I would argue regional importance given to humility. In other words, Ohioans generally don’t like fancy pants, hifalutin braggarts.

Finland gets a lot of good international press, much of which is focused on its education system and happiness. Yet I will never forget the reactions of many Finnish people when I told them how much I enjoyed Finland. The reaction of surprise and even shock is well known to me. I’m from Ohio.

So, if a lot of Finns won’t brag about Finland, I will steal the once-upon-a-hashtag #bragforfinland. Earlier in the series we covered playgrounds and Runebergin tortut, so here are a few other things that I will always treasure about this place.

You will never meet a less fashionable human than me. I wore flannels in the 90s and I wear flannels now. I also wore them during the infamous lumbersexual period a few years ago. If you see a mostly bald, short dude walking with a ruck sack in Helsinki sporting shorts, hiking boots, and shirt with some reference to Ohio, that’s me. I don’t care about design.

And yet Finnish design is really, really cool. If Arabia, Artek, Iittala, and Marimekko ever want to open a museum or showroom in the United States, our house in Ohio would probably be a good place to start.

And if Makia needs a new model with absolutely zero qualifications, here I am.

It’s worth the hype, particularly when paired with icy water, a grill, and tasty libations. It will be one of my last orders of business here on June 29.

Retirement dreams involve an AllasUunisaariLöyly-esque joint on Lake Erie in downtown Cleveland. Not sure I’d get the loan to launch.

I really enjoyed studying, learning, and speaking Finnish, which is like a very logical 500,000 piece puzzle. I usually like to play in the 500-1,000 range.

Question: I can simultaneously love the language and hate the partitive, right? Or directions? 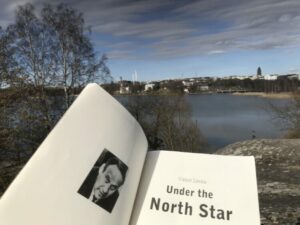 I learned of my assignment to Finland when I was in Kabul in 2015. A few friends at the Finnish Embassy in Kabul invited us over for sauna, karjalanpiirakka, mämmi, Karhu, good company, and a duck and cover. That night I also heard the name Arto Paasilinna for the first time. That conversation launched a new journey into the work of Paasilinna, Linna, Kivi, Sillanpää, and, of course, Jansson. These titans of Finnish literature are truly underappreciated in the United States and more of their work should be published in English.

Of the six books I will take on the plane, one is Jansson’s Winter Book and the other is Linna’s Under the North Star Part 3, Reconciliation (parts 1 and 2 were magnificent, as was Jansson’s Summer Book).

Wherever I travel in the world, I love to visit national parks. Finland’s national park system is terrific. But what makes Finland magical is that nature is always just outside the door. From my apartment in Helsinki, I can walk to multiple beaches and parks or ride my bike along impressive trails through woods or along the coast. In this time of “social distancing” I have logged more than 300 miles of hikes along the coast, in Helsinki Central Park, and in other areas of Helsinki.

Nothing beats freshly picked berries or the fresh berry markets that pop up around Finland in the summer. Some of my favorite memories here are picking berries with my wife and daughter at Nuuksio or strawberries at Koivistoinen Farm, and then making fresh jam at home.

Can I get a recipe already? We ate millions of these things in Finland with munavoi.

Korvapuusti (Smack to the Ear)

For my money, nothing beats a korvapuusti. I will miss them dearly, even if my waistline won’t. A lovely Finnish gentleman once told us in the line at Café Succes that korvapuusti means smack to the ear. I don’t know if they are a smack to the ear or the stomach, but they are wonderful.

Without commenting at all on Finland’s domestic politics, Finland’s government is currently led by a 34-year-old female prime minister. Women lead many parties and have prominent seats in Parliament and in the diplomatic service.

And it’s no wonder. I have engaged with numerous Finnish high schools and universities over the past few years. Finland’s youth are dynamic and empowered. They don’t wait for a seat at the table. The middle schoolers challenged me on wide ranging U.S. domestic and foreign policy topics. They seize their seats at the table. The Finnish education system deserves its reputation.

And after some of my earlier assignments, I truly appreciated the overwhelming popular support for the human rights of all, including LGBT+. I was honored to collaborate with HeSeta and the Embassies of Canada, Mexico, and the United Kingdom over the past few years to organize diplomatic participation in Helsinki Pride. I will never forget marching with our ambassador and other U.S. Embassy and diplomatic colleagues through the streets of Helsinki with thousands and thousands of Finns and people from around the world in the last two Helsinki Pride parades.

Back in 2016, I thought for certain my Finnish teacher would kill me when I told her that I had never heard of the Moomins. My how times have changed. We have a ridiculous collection of Moomin dishes (considering our regular relocations), have watched the old and new YLE series, read some of the books, etc.

For our last vacation in Finland, we chose a weekend in Rymättylä with a day in Naantali and Moomin World. It was our second time.

This is my fourth diplomatic assignment abroad and I have never enjoyed such incredible collaboration with the government and people of another country. My colleagues at the U.S. Embassy are without peer. And colleagues at partners such as SAM Finland and the Fulbright Finland Foundation approach their noble missions with zeal, building and sustaining connections among American and Finnish people.

Before I even arrived in Finland, the Finnish Embassy in Washington honored me with invitations to discussions and receptions at the embassy, as well as with their willingness to struggle in Finnish with me. That takes true sisu. And after I arrived in July 2017, the Finnish Embassy in Washington and the MFA were true partners on an ambitious #USFIN or #FINUS100 project, starting with the selection of 100 photos to capture the U.S. – Finnish relationship from 1919 to 2019 and ultimately developing a road show of images that traveled the United States and in Finland. The Office of the President of Finland and the MFA were phenomenal partners on so many high-level visits, including President Trump, Secretary Pompeo (2x), former Secretary Mattis, and others. From Inari to Helsinki, incredible people and organizations across this majestic land made my life easy and unforgettable over the past few years. I will always believe that we accomplished amazing things yhdessä. 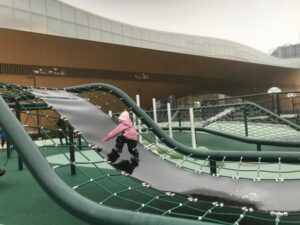 We moved to Finland when my daughter was just 10 months old. The best decision we ever made was choosing our Finnish daycare, which turned out to be much more like a loving extended family. Over 2.5 years of playing outside for two hours each morning rain or shine (unless of course it is more than 15 below zero) and spending time with her teachers and friends, my pride and joy evolved into a confident, funny, assertive, and loving young girl. Ja hän puhuu suomea erittäin hyvin. She met the best friends of her young life in that magical little place and I am forever grateful.

While I was studying Finnish, I heard many legendary tales about how difficult it is to make Finnish friends. Rubbish. We have met amazing lifelong friends in Finland and cannot thank all of our friends enough for inviting us on vacation and into their homes, mökki, and lives over the past few years. You will forever be in our thoughts and memories.

Our lives are better because of you. Suuret kiitokset.

So there it is. Thanks Finland for three awesome and unforgettable years. I hope to see you soon.