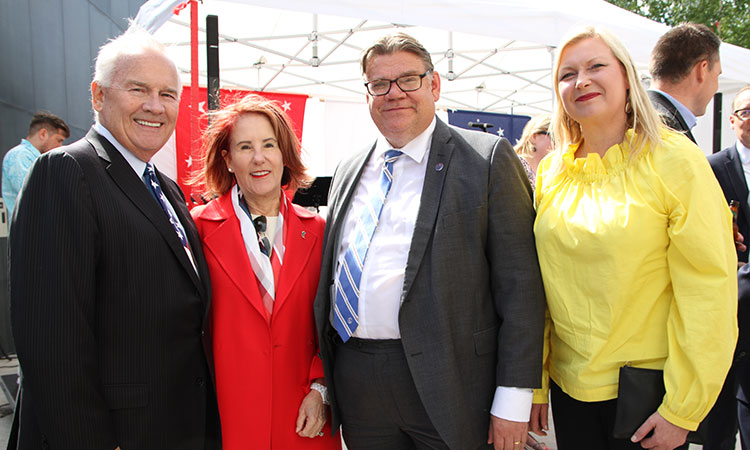 Ambassador and Mrs. Pence with Minister for Foreign Affairs and Mrs. Soini.

One June 20, 2018, Ambassador and Mrs. Pence welcomed over 1,000 friends and guests to celebrate the 242nd anniversary of American independence at the U.S. Embassy in Helsinki. As part of the “Iconic America” theme, the party featured classic American cars, the Statue of Liberty, as well as guest appearances from Darth Vader, Superman, Uncle Sam, the Wicked Witch of the West from the Wizard of Oz, the Helsinki Wolverines Ladies American Football team, and a group of Helsinki Athletics Cheerleaders. In addition to classic American food and drinks, guests also had the opportunity to hear incredible performances by Anttu Koistinen on kantele and Cute 66, a band consisting of Juha Björninen, Anssi Nykänen, Jarmo Hynninen, Timo Mynttinen with Neil Berrymen and Stella on vocals.

The party also highlighted the United States role as the theme country at the 2018 Helsinki Book Fair by featuring quotes from icons of American literature, such as Zora Neale Hurston, Toni Morrison, John Steinbeck, Mark Twain, and others. More pictures of the event can be found at the U.S. Embassy’s Flickr album at https://www.flickr.com/photos/usembfinland/albums/72157670350437418.