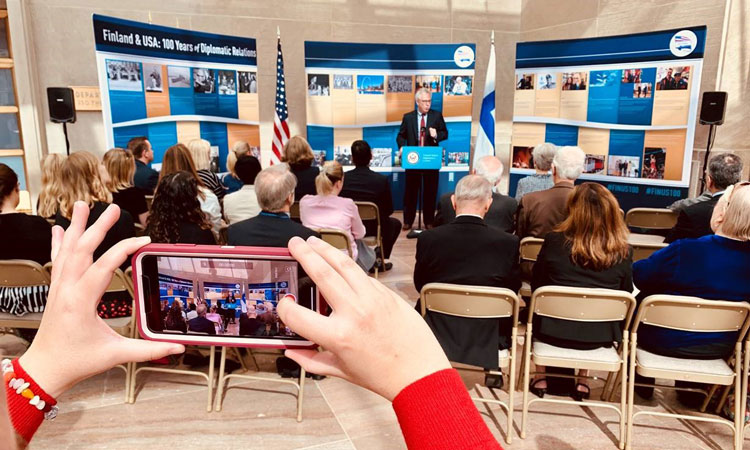 100 years ago on May 7, 1919, the United States recognized Finland in a letter from Secretary of State Robert Lansing to Foreign Minister Rudolf Holsti. On May 7, 2019, Acting Principal Deputy Assistant Secretary Patrick Murphy gave his remarks at the centennial exhibit closing reception held at the Diplomacy Center in Washington, D.C.

Thank you for joining us today to celebrate this milestone – 100 years of diplomatic relations between the United States and Finland.

100 years ago today on May 7, 1919, the United States recognized Finland in a letter from Secretary of State Robert Lansing to Foreign Minister Rudolf Holsti.

It is a testament to the strength of our close partnership that right now in Finland, Secretary Pompeo, Acting Under Secretary Singh, Acting Assistant Secretary Reeker, and two other Acting Assistant Secretaries are attending the Arctic Council Ministerial in Finland.  It is fitting that Secretary Pompeo will meet Foreign Minister Soini today.  So I hope that you will forgive them for not being here in person and that you will allow me to congratulate you, Ambassador Kauppi, on their behalf for Finland’s outstanding chairmanship of the Arctic Council.

Our two nations shared many great moments over the past 100 years, and the exhibit behind me is a testament to that fact.  Together, we have contributed to growing peace, prosperity, and security for our peoples.  Together, we have expanded personal freedoms and promoted democratic values across the globe.  And as Finland prepares to assume the EU Presidency this July, we look forward to working together to further strengthen our transatlantic partnerships.

2019 also marks the 70th anniversary of the ASLA exchange program, the direct predecessor of the Fulbright program in Finland.  The U.S. Congress established the ASLA program through a trust fund, using Finland’s own loan repayments dating back to WWI.  In 1952, the ASLA program became the Fulbright program in Finland.  This trust fund – along with annual allocations from the Governments of the United States and Finland and funding from dozens of Finnish universities and private sector partners – enables nearly 50 Finns and Americans each year to participate in Fulbright exchanges between our two countries.

We are also pleased that over 750 Finnish students study in U.S. universities and more than 450 American students attend Finnish universities – and that student exchanges between our countries continue to grow.

In additional to these exchanges, about 200,000 Finns visit the United States each year, and about 230,000 Americans travel to Finland.

These kinds of close ties underpin our relationship, but the bond between us is much deeper.  About 700,000 Americans trace their ancestry to Finland and contribute to the rich diversity of the United States.  Finnish-Americans helped to create our nation — John Morton, a Finnish-American, was a signatory of the Declaration of Independence.  I personally believe that the American spirit of perseverance can be directly attributed to the “sisu” or grit of countless Finnish-Americans who helped shape our history.

The St. Louis Arch and Dulles airport were both designed by a Finnish American.  And, of course, Finland gave us the word “sauna.”  I have it on good authority that an induction into the “Diplomatic Sauna Society” at the Finnish Embassy is one of the hottest tickets in Washington D.C. — and I stand ready to receive my invitation at any time.

Our sports teams are better thanks to Finns and not just in hockey.  Finnish basketball star Lauri Markkanen is doing a great job with the Chicago Bulls and teaching his teammates Finnish while he is at it.  And if you haven’t seen the Bulls Finnish-language videos make sure to google them, but only after I’m done with these remarks.

It may surprise many to know that Finland’s national sport is not hockey, skiing, or Formula 1, but pesäpallo which has American roots and was modeled after baseball.

I would be remiss if I did not also speak on Finland as a vital security partner.  As an “Enhanced Opportunity Partner,” Finland has a robust political and military partnership with NATO.  Finland is an invaluable partner in the global war on terrorism, including as an esteemed member of the Global Coalition to Defeat ISIS.

We commend Finland for standing up and hosting the European Center of Excellence for Countering Hybrid Threats (Hybrid CoE) to support work to increase preparedness, build resilience, and defend against hostile state influence activities.  As a founding participating state, the United States is committed to the Hybrid CoE’s mission and to continuing our important partnership with Finland in this arena.  We also value Finland’s support for human rights and the safety of journalists in venues such as the OSCE.

Finally, Finland is a valued and powerful economic partner.  Foreign Direct Investment from Finland to the United States is $13.3 billion, and Finnish-owned companies employ 29,000 people in the United States.  Nokia acquired Alcatel Lucent, and with it Bell Labs – there is no greater example of how reciprocal investment leads to great innovations.

The United States exports about three and a half billion dollars in goods and services to Finland and the United States is Finland’s third largest export market.  The value of trade between our countries will only continue to grow in the years to come.

I am pleased to announce that while we are closing this exhibit’s run here at the United States Diplomacy Center, the exhibit will be traveling all over Finland and the United States this year.  Our embassy collaborated with the Finnish Embassy here in Washington for almost a year on the exhibit and a related social media campaign.

I wish to thank everyone who worked tirelessly to make this exhibit such a success, Ambassador Kauppi for her support and dedication to our partnership, and all of you for being here to help us mark this important day.  Here is to an ever-stronger partnership in the centuries to come.