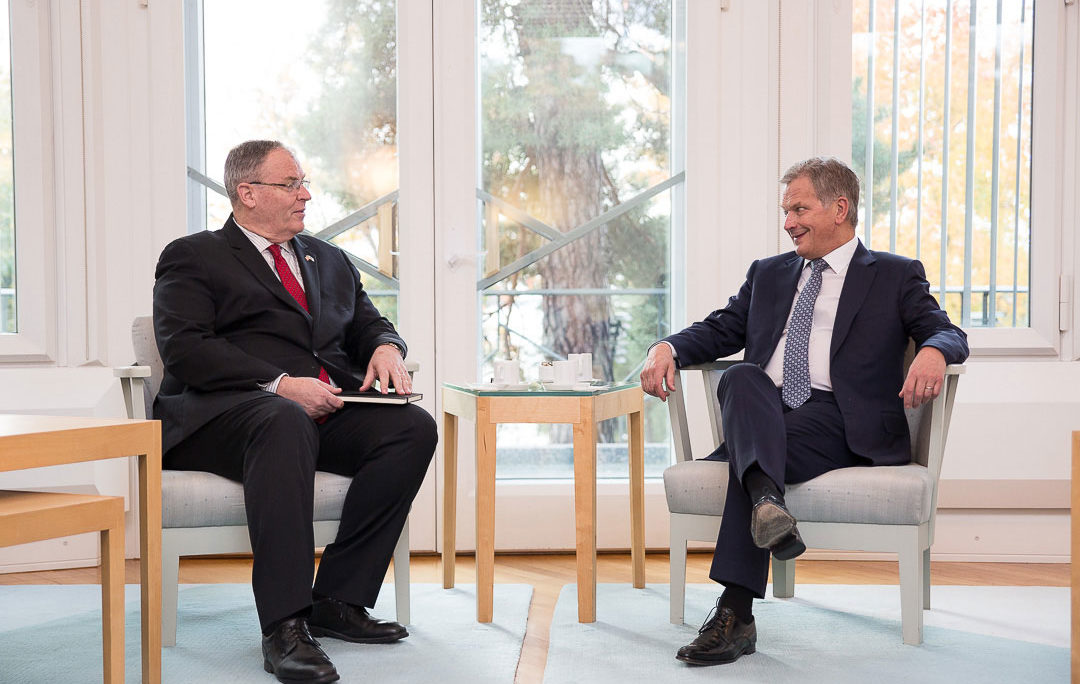 Deputy Secretary of Defense Richard Work met with Finnish President Sauli Niinistö on October 7, 2016. © Matti Porre/Office of the President of the Republic of Finland

Deputy Secretary of Defense Bob Work held a series of meetings today in Helsinki, Finland, as part of ongoing U.S. efforts to strengthen bilateral and multilateral security relationships with the nations of the Nordic-Baltic region.

Deputy Secretary Work met with Finnish President Sauli Niinistö to thank him for Finland’s contributions to the counter-ISIL campaign, peacekeeping operations, and regional security. They discussed ways to continue building the strong, deep and lasting security partnership between the United States and Finland.

Work and Minister of Defense Jussi Niinistö met to sign a bilateral statement of intent that formalizes our two nations’ shared desire to cooperate on issues of mutual interest. Deputy Secretary Work and Minister Niinistö discussed steps to implement the statement of intent, which lays a foundation for stronger partnership between the United States and Finland through mechanisms such as sharing of security information and expanded joint training and exercises.

Deputy Secretary Work also participated in the third of a series of multilateral meetings with Nordic-Baltic nations. Building on previous meetings held in Oslo, Norway and Stockholm, Sweden, delegations from Denmark, Estonia, Finland, Iceland, Latvia, Lithuania, Norway, Sweden and the United States discussed several issues of shared interest. The meeting included an update on NATO’s Enhanced Forward Presence effort on its eastern flank, the U.S. European Reassurance Initiative, security challenges in the Baltic Sea region, the status of the campaign to defeat ISIL and opportunities to strengthen security and stability in the region.

Deputy Secretary Work concluded his visit with a first-of-its-kind trilateral meeting with Finnish Permanent Secretary for the Ministry of Defense Jukka Juusti and Swedish State Secretary for Defense Jan Salestrand. The three discussed ways to build on strong bilateral ties among our nations, and agreed to additional trilateral sessions at a working level in Washington later this year.

Image: Matti Porre/Office of the President of the Republic of Finland